As the suburban man accused of secretly recording ESPN reporter Erin Andrews naked in her hotel room awaits trial, security experts warn that surreptitious invasions can happen in what might seem the most private of places.

Their advice: Don’t assume someone isn’t watching. “A pervert will take advantage of the fact that people in a hotel will act as if they are at home,” said Charles Slepian, who consults with hotels on security issues and is founder of the Foreseeable Risk Analysis Center in New York.

Andrews’ lawyer, meanwhile, cautioned that there aren’t many legal protections for those who discover that intimately embarrassing images are circulating on the Web.

Federal prosecutors allege that Michael David Barrett, 47, of Westmont used a hacksaw to alter the peephole eyepiece in the door of a Nashville hotel room where Andrews was staying, and secretly recorded her while she undressed.

Slepian advises people to take a look through the peephole of their room from the outside. If it hasn’t been altered, you shouldn’t be able to see anything, he said.

Perry Myers, owner of the U-Spy Store in Bucktown, always takes a look around the hotel rooms where he stays, seeking the telltale signs of surveillance. Even the tiniest hole in a piece of electronics should raise flags, he said. Perhaps it’s Myers’ line of work that makes him cautious — or paranoid. He sells equipment for spying, and devices that can detect the electronic tools of spies. 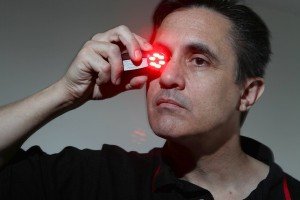 For women like Andrews, options are limited once embarrassing videos are online, said her attorney, Marshall Grossman of Los Angeles. “As quickly as images come down, they show up, like seeds in a forest. They’re constantly sprouting.”

Hiring an attorney is expensive, he said. So are sending out “cease and desist” orders and monitoring Internet sites to make sure they take down the content.

Filing a lawsuit against someone who posts unauthorized images sounds easy, but frequently the type of person who would do that doesn’t have the money to make legal action worthwhile, Grossman said.

Barrett has been charged with one count of interstate stalking using harassing and intimidating surveillance, a federal crime.

But in state courts, those convicted of Internet privacy crimes often just face misdemeanors, Grossman said. Federal laws like the one Barrett has been charged with have “a lot of teeth,” he said, but are restrictive in how they can be applied. “It requires interstate action,” he said, as well as an “intent to use electronic surveillance in such a way as to inflict death, serious bodily harm or emotional distress on the victim.”

Grossman said those recording someone solely out of a prurient interest might be harder to charge under the felony federal law. Andrews hopes her case will prompt lawmakers to close the legal loopholes, he said.

Jeffrey Catrett, dean of the hospitality school at Kendall College, said it’s often a high-wire act for management to try to balance customers’ convenience and safety.

“It’s a terrible trade-off,” he said, with only one remedy: Hotel employees “just have to be naturally and permanently suspicious.”