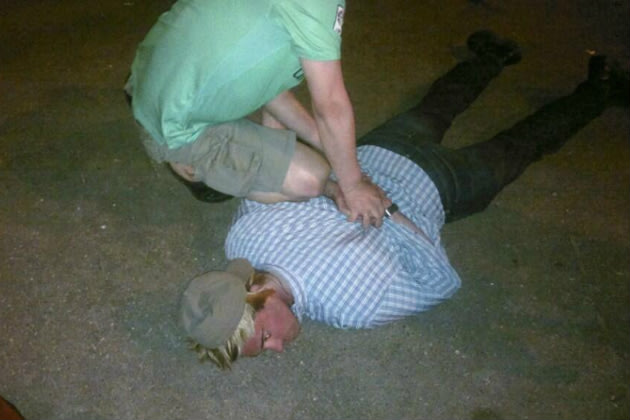 That’s what Russia’s Federal Security Service said an American accused of being a spy was carrying when he allegedly tried to recruit a Russian agent for the U.S. Central Intelligence Agency. The Russian counterintelligence bureau now wants the man, identified as Ryan Christopher Fogle, expelled from the country, declaring him a “persona non grata.”

Fogle was detained on Monday wearing a blond wig, Russian authorities said. They also said he had large sums of euros, a Boy Scouts-style compass, three pairs of glasses, a flashlight, a map of Moscow and a typed contract offering $100,000 for future spy work.

“This is a down-payment from someone who is very impressed with your professionalism and who would greatly appreciate your cooperation in the future,” the letter, published by Russian news sites, reads. “Your security means a lot to us. This is why we chose this way of contacting you. [W]e will continue to make sure our correspondent [sic] remains safe and secret.”

The letter concludes: “We look forward to working with you in the nearest future. Your friends.” 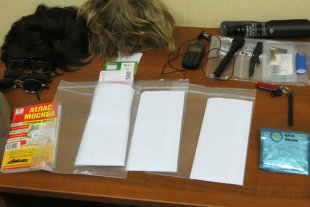 According to Russian officials, Fogle was a career agent whose cover was his role as third secretary of the political department of the U.S. Embassy in Moscow. Photos published by the Russia Today website showed a man, presumed to be Fogle, in a blue-checkered shirt, baseball cap and blond wig pinned facedown to the ground. He was then was shown handcuffed inside an FSS office—without the wig. Another photograph shows a table covered with Fogle’s purported spy gear.

“The detainee was brought in the reception office of the Federal Security Service and after necessary procedures was handed over to the official representatives of the U.S. Embassy,” the bureau said in a statement. “Recently American intelligence has made multiple attempts to recruit employees of Russian law enforcement organs and special agencies, which have been detected and monitored by Russian FSB counterintelligence.”

The U.S. Embassy has yet to comment on the report.

According to The New York Times, Russia’s Foreign Ministry summoned U.S. Ambassador Michael McFaul to appear on Wednesday to respond to the espionage allegation.

The ambassador, Reuters noted, was holding a live Q&A session (“#AskMcfaul”) on Twitter when news of the apparent arrest broke.